The Santa Margarita Gun Club hosted a Palma practice on September 16th and an official Palma team match on September 17th on Range 117A.

On Saturday we gathered to get our gear tuned up for three distances we would be shooting at on Sunday. We shot twenty rounds for record with unlimited sighters at the 800, 900, and 1000 yard lines. 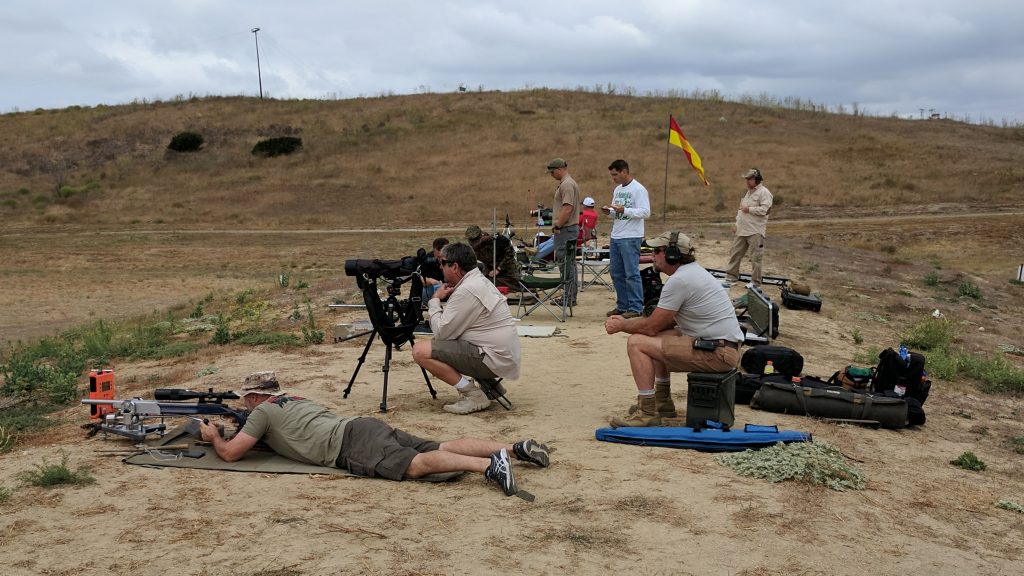 When everyone was done firing at the 800 yard line we moved our gear back to the 900 yard line and repeated the cycle. Below we have a few of the Marines who were going to shoot for a national record on Sunday warming up with us. 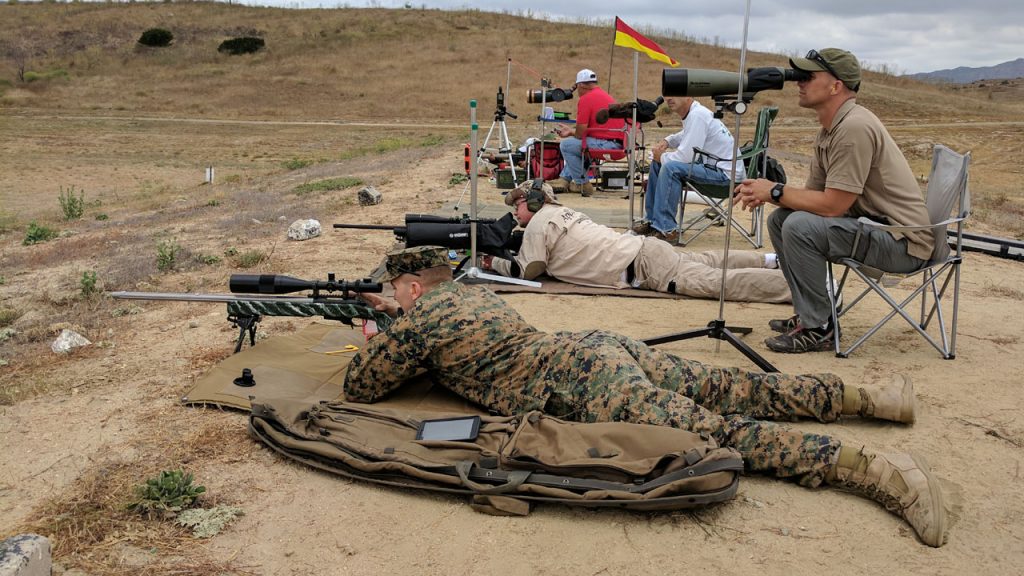 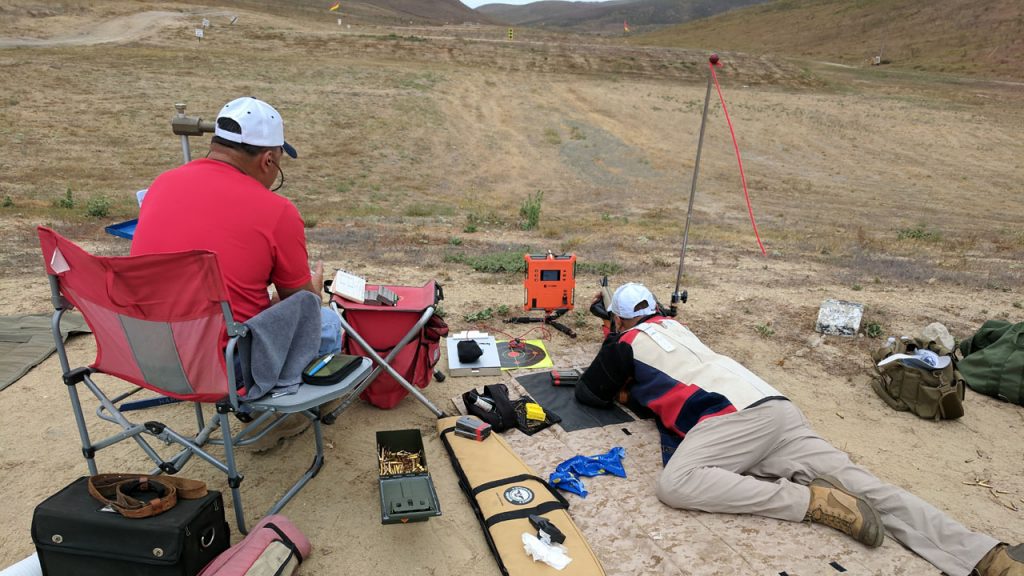 Of course Harry couldn’t resist giving SSgt Wayne Gallagher’s Desert Tech rig some attention. Nor could anyone blame him! 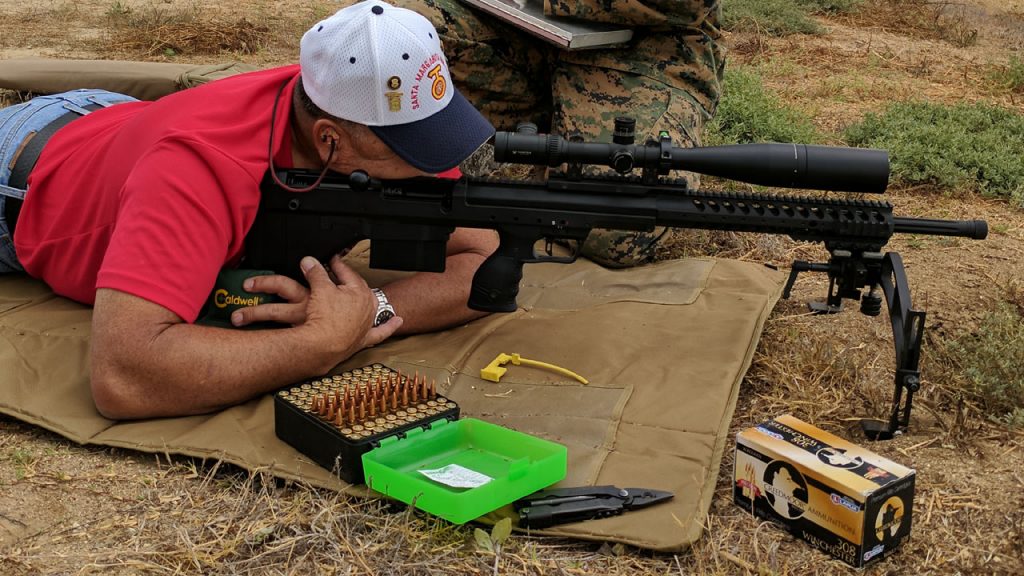 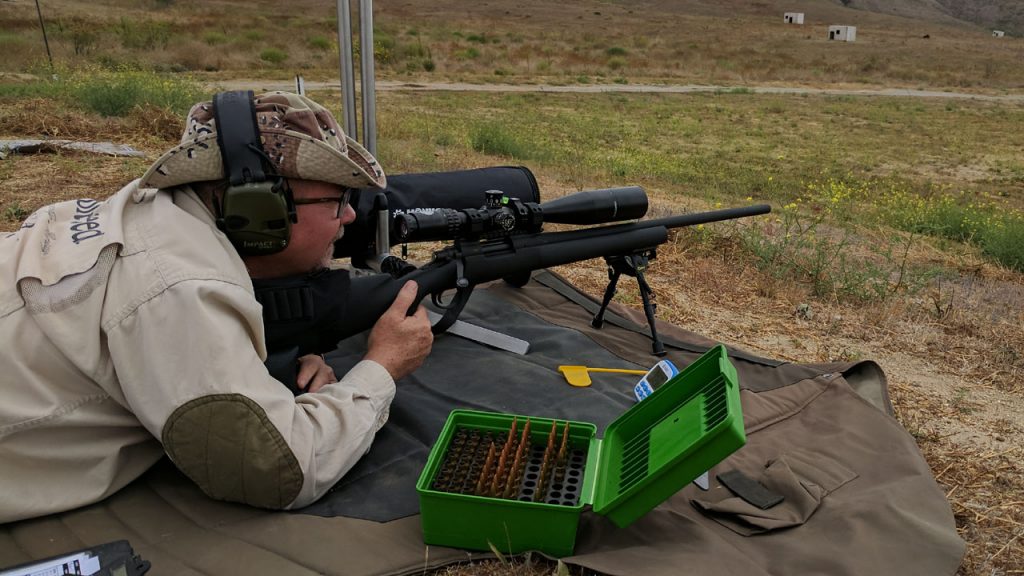 I myself was enjoying a particularity good day on target 1. The most satisfying ‘last shot’ in a string I’ve had to date hung proudly between relays, a perfectly center-punched ‘X’! 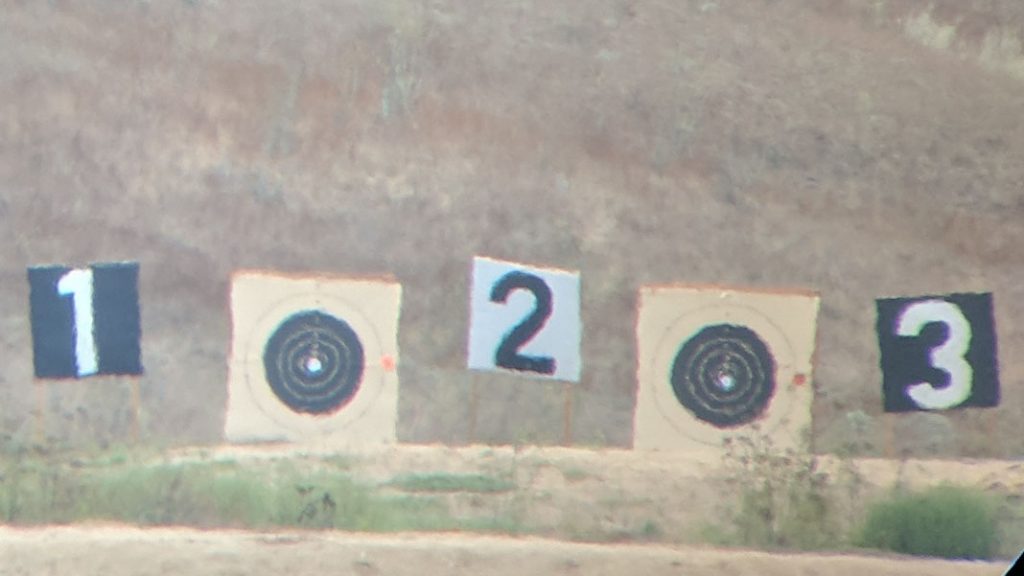 Of course we saved the 1000 yard line for the end of the day when the wind was playing it’s normal tricks on us.  But it wasn’t so normal.

This is our 1000 yard firing point at 12:55pm on Saturday. As you can see the flags were unusually lazy, but what you didn’t see was this was a lull. The wind would creep back in quickly and pick an arbitrary direction as well. During one string of fire I saw it move through three distinct patterns, blowing from one side, a lull, and then the opposite side. That’s tricky for people who ‘shoot through’ and nerve wracking for those who wait for things to come back to their chosen condition. If the wind has done something new, what is the pattern going to be now? As you can see here at 13:48 Mike Jones and Janusz Dabrowski were battling something quite different than what is pictured above. 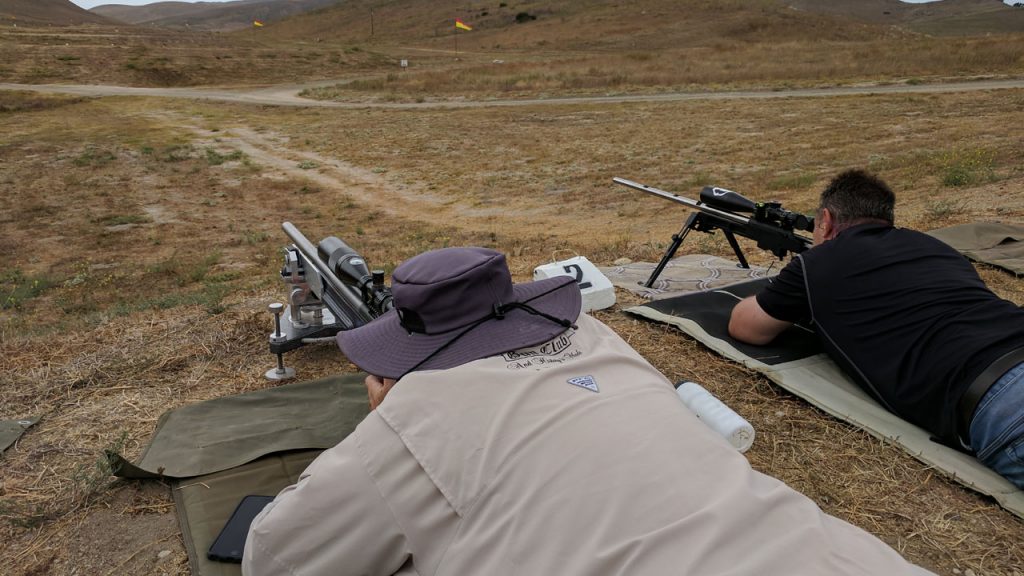 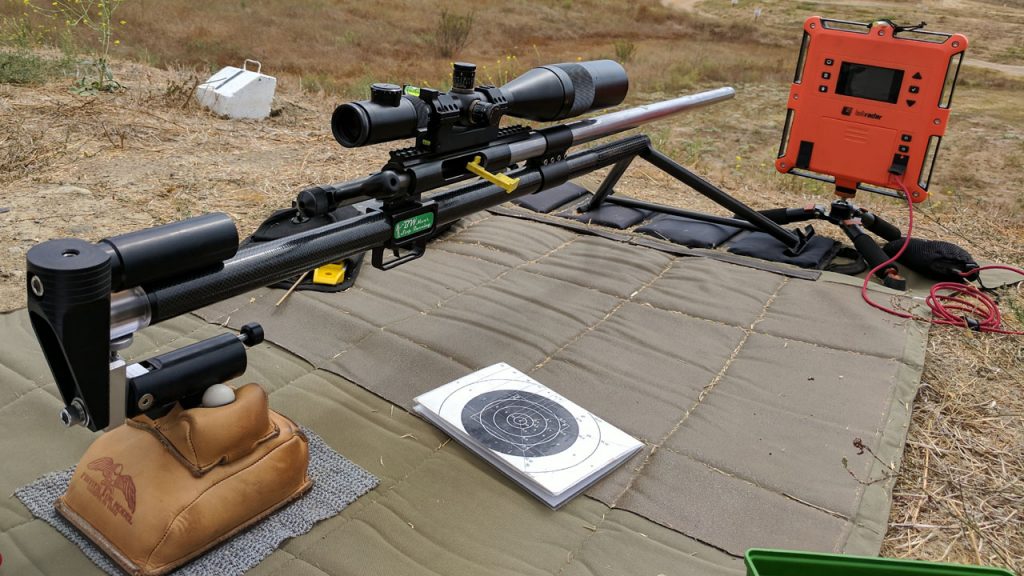 I shot my very first ‘clean’ – all twenty shots were either a ten ring or x-ring hit at the 800 yard line. During this string of fire I actually shot the spindle out of the spotter on two consecutive X-ring hits. For those not familiar, this means I effectively put two back-to-back shots through the same x-ring hole! I also posted my personal best of 585-25X for the day. The pit pullers were kind enough to save me my trophy too, the shattered golf tee! Along side of this are the two award pins I earned for shooting exceptionally well in my classification, currently at ‘Expert’. Januz Dabrowski was hot on my tail though, including earning himself an award pin for his 900 yard performance of 194-6X 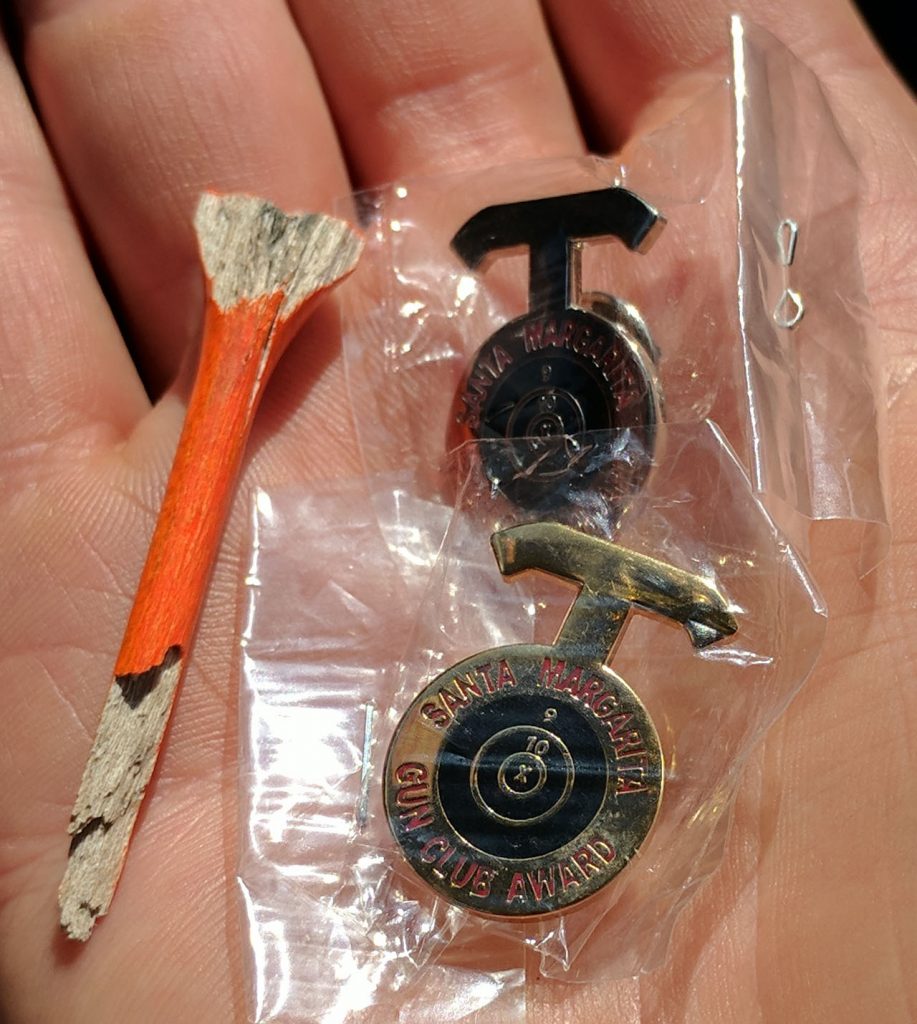 Even though Mike Jones was only testing and not shooting for score, it is worth mentioning that he chased me down with a 199-16X to my 200-15X, only a fingertip away from putting me into second place. He also managed to beat me in the consistency of ammunition department recording a mind blowing SD of 4.4 at 2742 FPS! For those wondering, my best was ‘only’ 7.0 at 2780 FPS. Rich Elliot was also on our line, borrowing Mike’s rifle. He kept right up with us. Rich recovered the 5″ spotting disc we used on target one, and boy is it ready for retirement after we tormented it 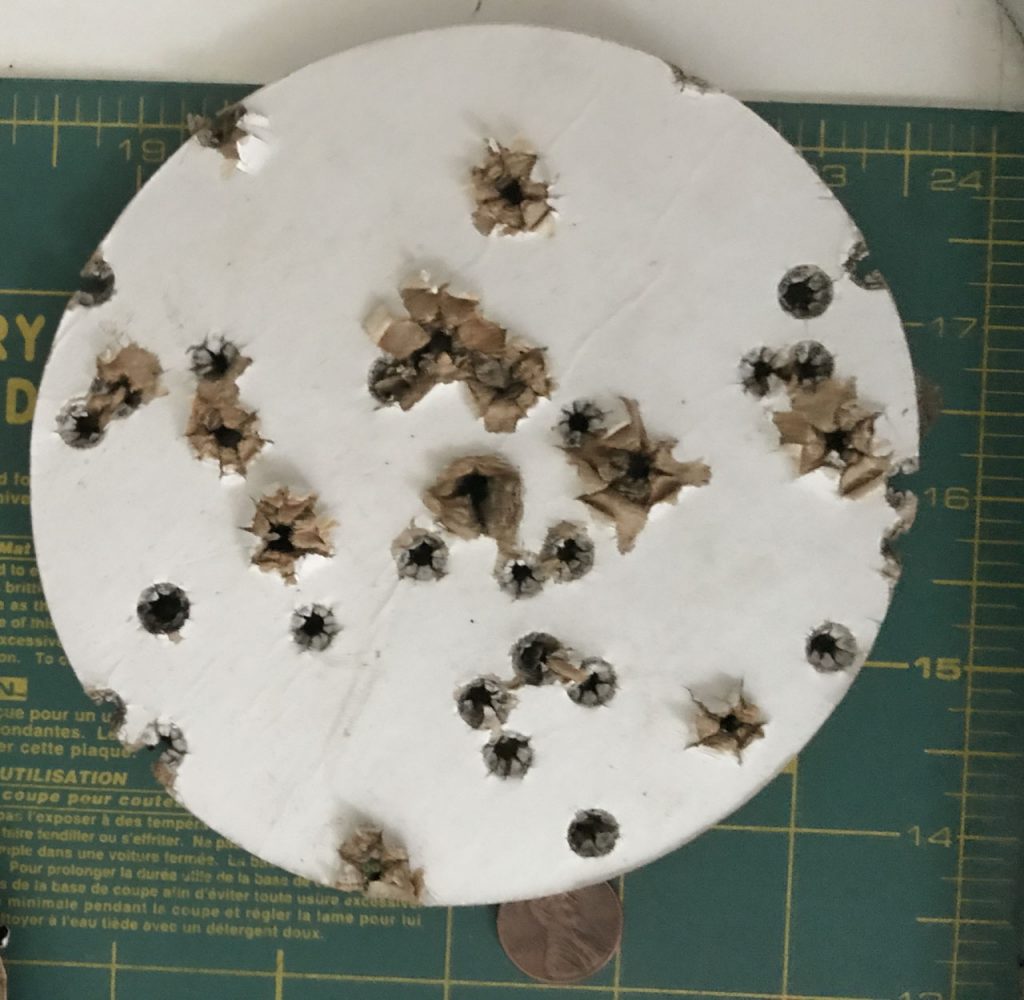 This was a great day with mild temperatures and a challenging course of fire. We couldn’t have done it without our medical staff, line officers, and USMC target pullers! So please join me in thanking LCpl’s Gimsley, Thweatt and Moralesvilla for their muscle in the pits, Paul Guy and Rich Elliott as our Medics, and of course Mike Jones and John Hermsen for organizing and staffing the event! Below are the scores for Saturday’s shooters going for record.

The Sunday Palma match course of fire consists of three different distances at which each participant fires 15 rounds for record. These are the 800, 900, and 1000 yard firing points. At the 800 yard line each competitor is allowed unlimited sighters.  However, as we move back to the 900 and 1000 yard firing points and into the wind that comes with the day’s progression, only two sighters are permitted per stage. This challenges competitors to know their ammunition and rifle and how the impact point shifts with changes in both distance and wind.

In addition to the Palma format we also made this a team match. A team consisted of four people which would split duties and positions on the firing line. In squad one, two shooters from a team would fire sequentially in a 47 minute block period of time. Meanwhile a team member would coach his team mates and the teams scorekeeper would score for an opposing team. Upon the end of the time block the roles would reverse and the coach and scorekeeper would take their turn on the firing line. This gave everyone an opportunity to shoot and also to participate in coaching and scoring.

The Palma tradition has been extended to any type of rifle class these days, but it originated with the iron sight sling shooter’s sport and here Mike Nies sets up to show us F-Class competitors how it’s done. Marc Mittry and Mike ran short in recruiting enough members to have a team, but traded off between pit and shooting duties to keep their discipline very well represented. 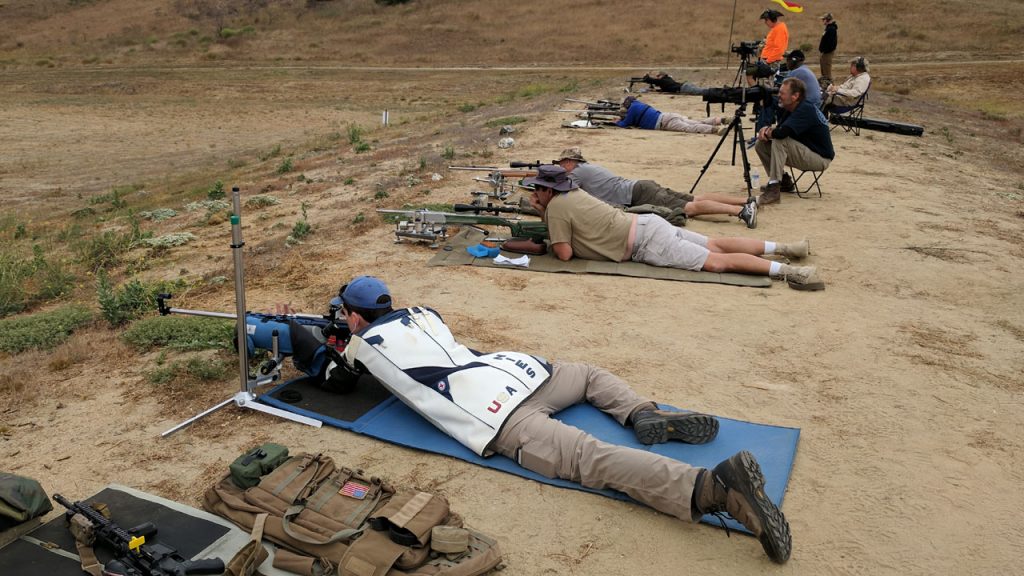 But wait a second, what’s this? Clearly Mike Nies has tried to cloak his identity by shedding his shooting coat but Mike Jones has caught him red handed behind his F-open rifle! Indeed, Mike agreed to pick up an empty spot on the F-Open team so we could have three full four person teams shooting in the match. Thanks for your “sacrifice” Mike Nies! 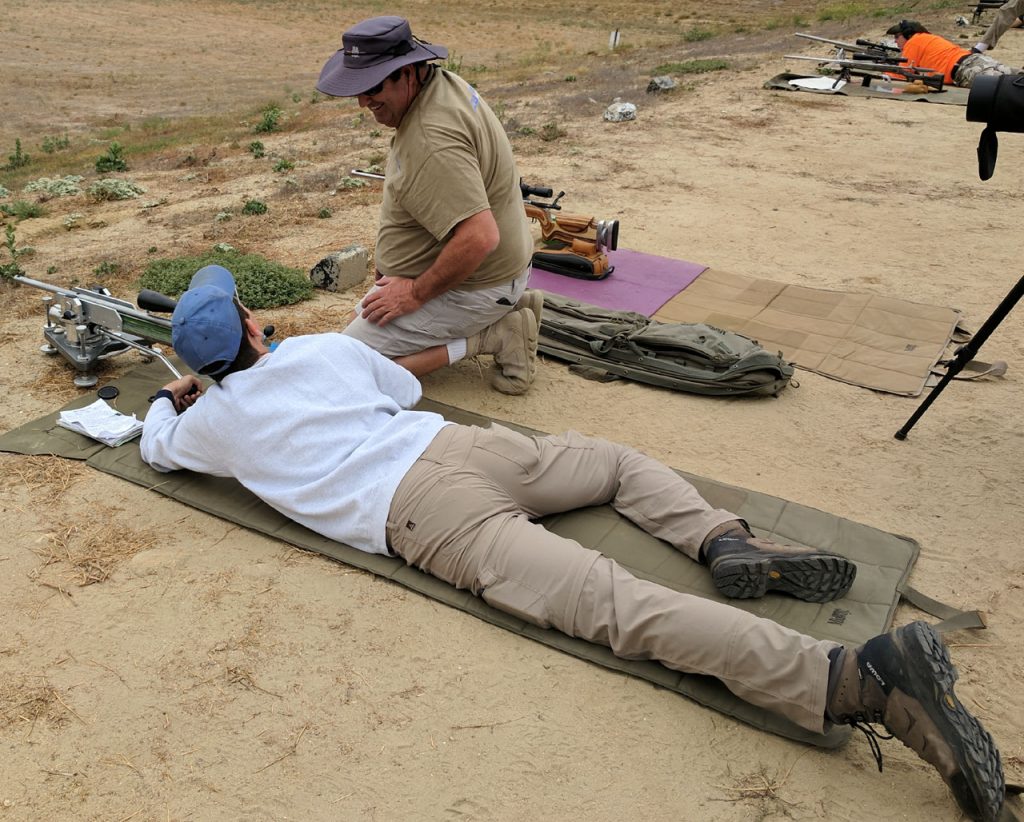 Rich Elliot is seen here using Mark Roth’s rifle to lay down some solid scores at the 800 yard line. He managed to catch Mike Nies by a single X-ring hit here! 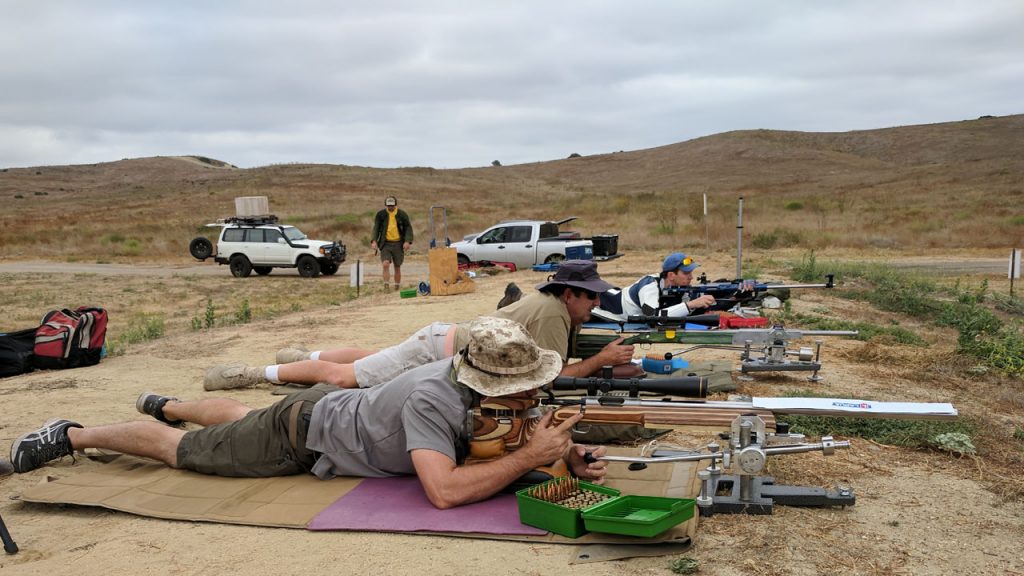 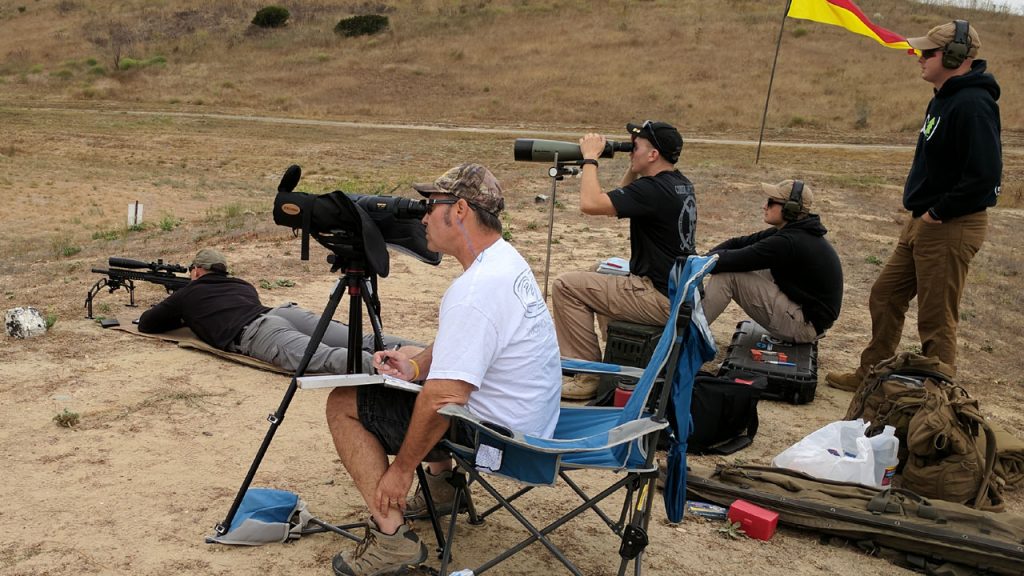 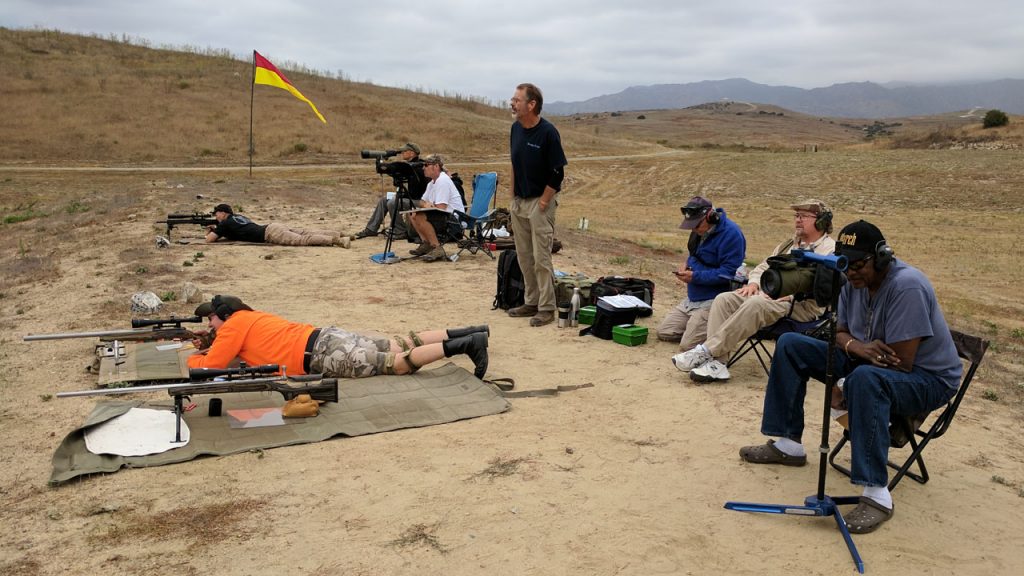 Here Steve Williams coaches John Cleary and pulls him on to target with a rifle borrowed from Mike Jones. Great teamwork guys! 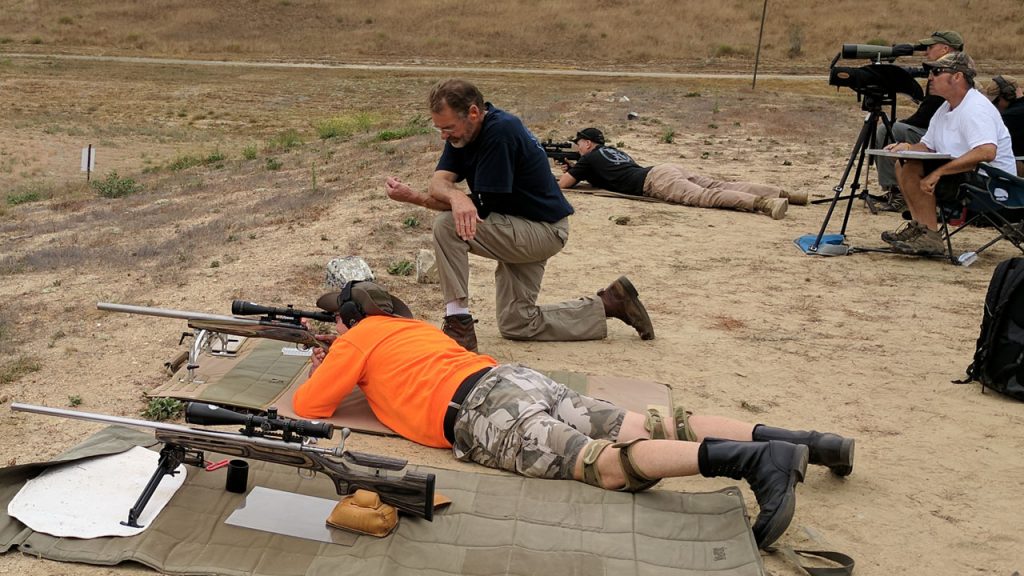 The battle continues at the 900 yard line. The flags are flying in true Range 117A fashion, a fishtailing headwind. 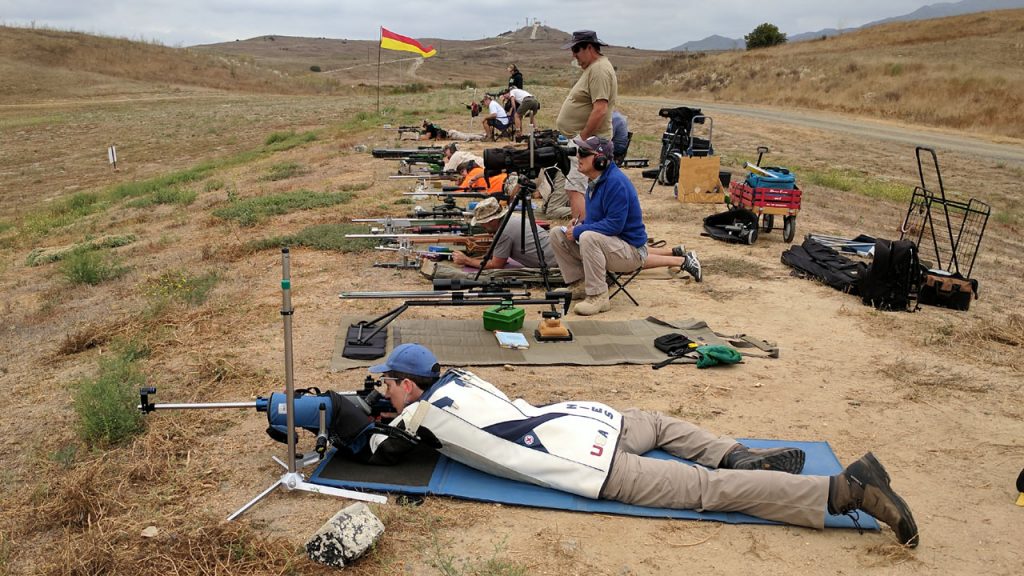 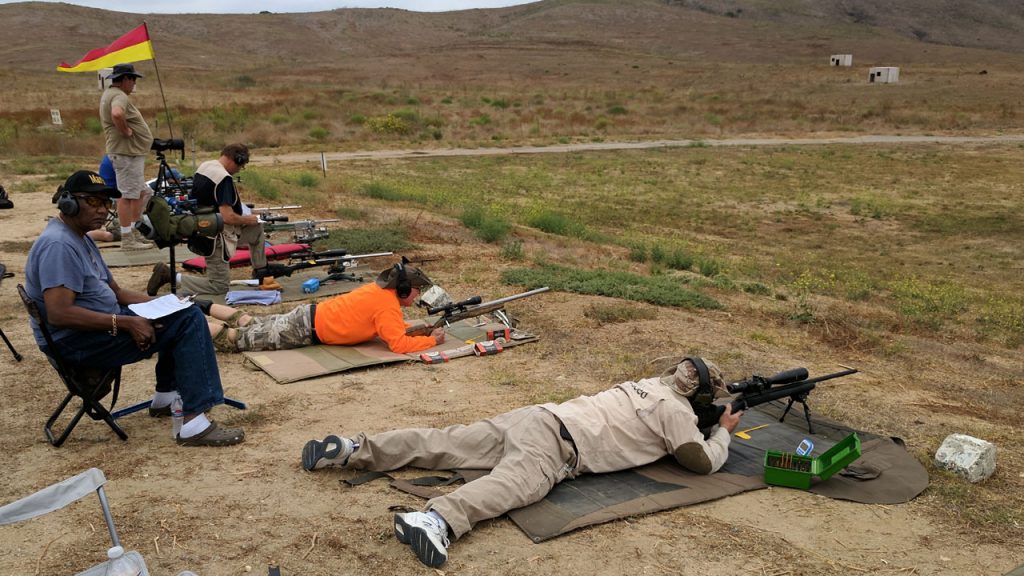 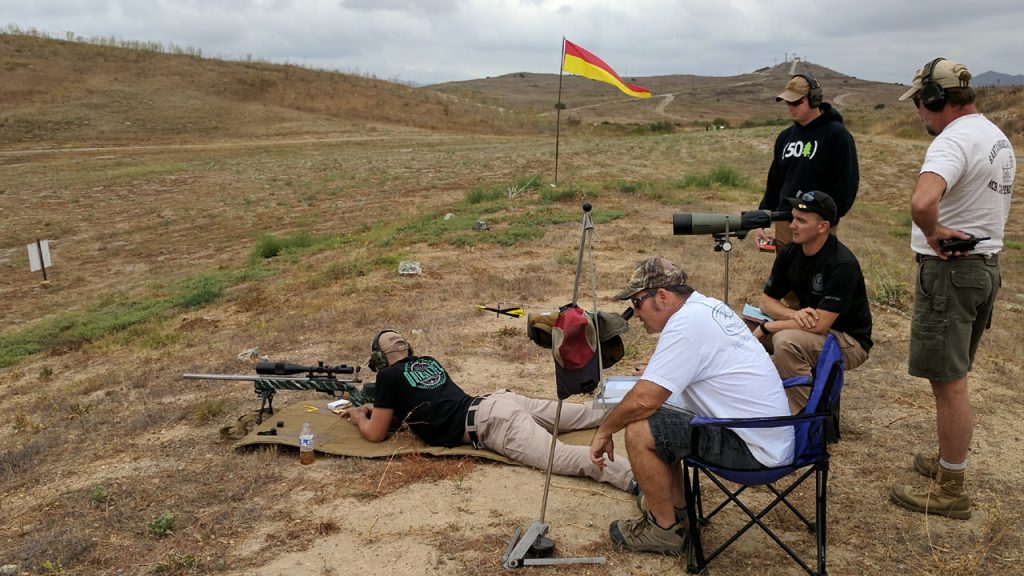 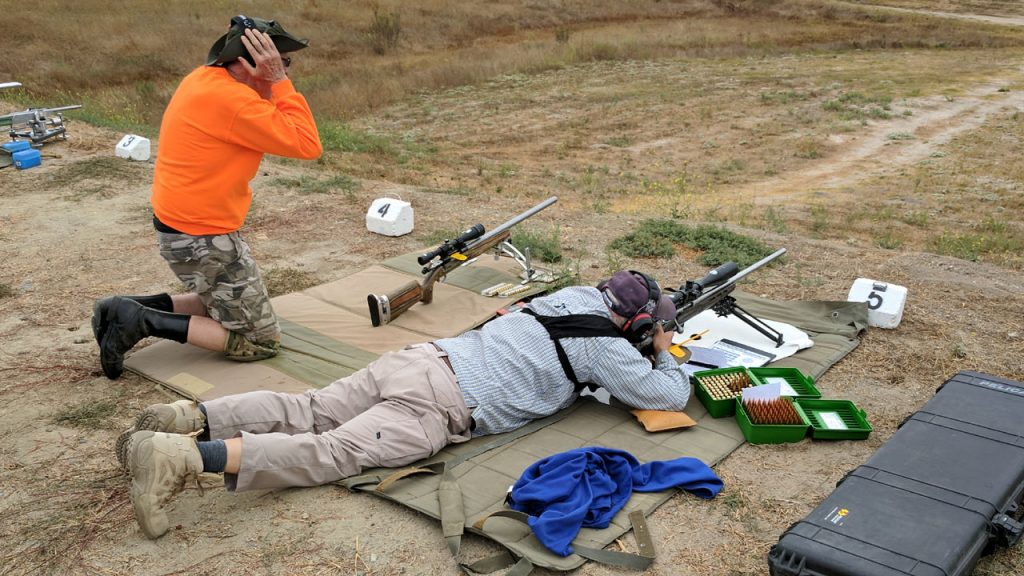 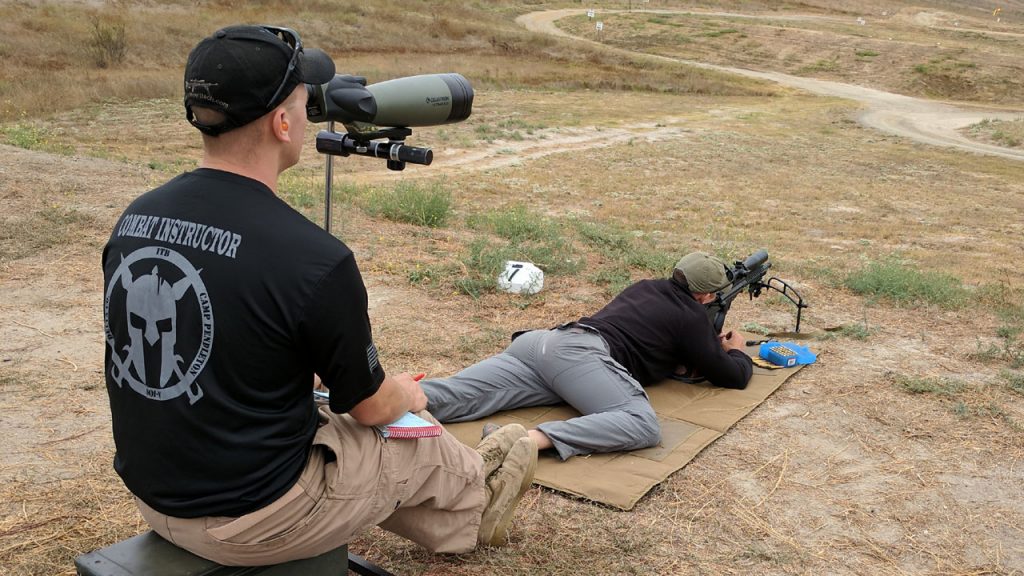 No longer trying to hide his true colors, Mike Nies tackles the oddity of an unslung rifle in his sling shooting coat. 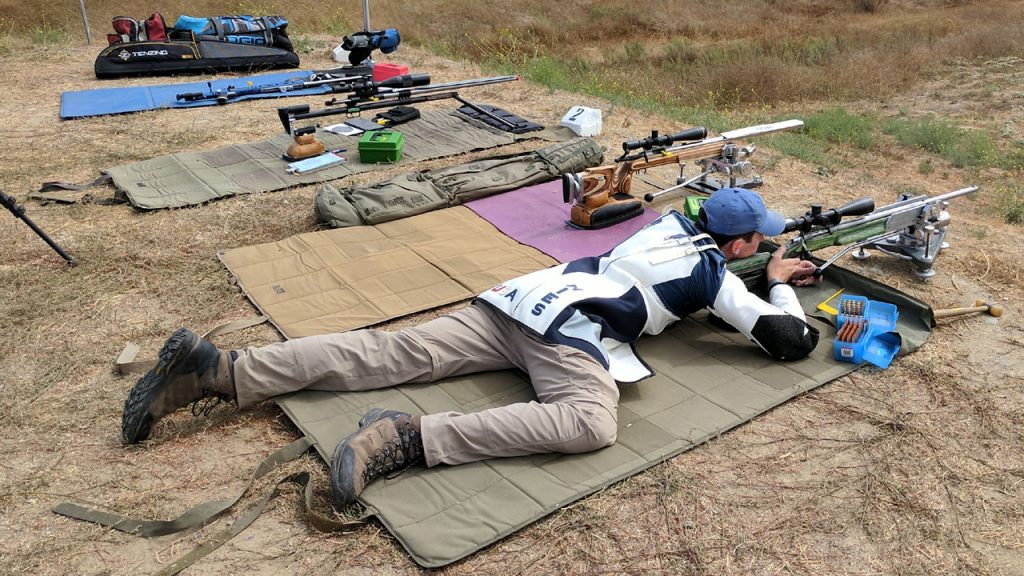 Half way through that string a stuck projectile in his loaned F-open gun had him scrambling for his own sling gun. In true competitive form he did what he could with what he had to finish the course of fire. You’re not going to see another iron-sighted F-Open gun any time soon guys! 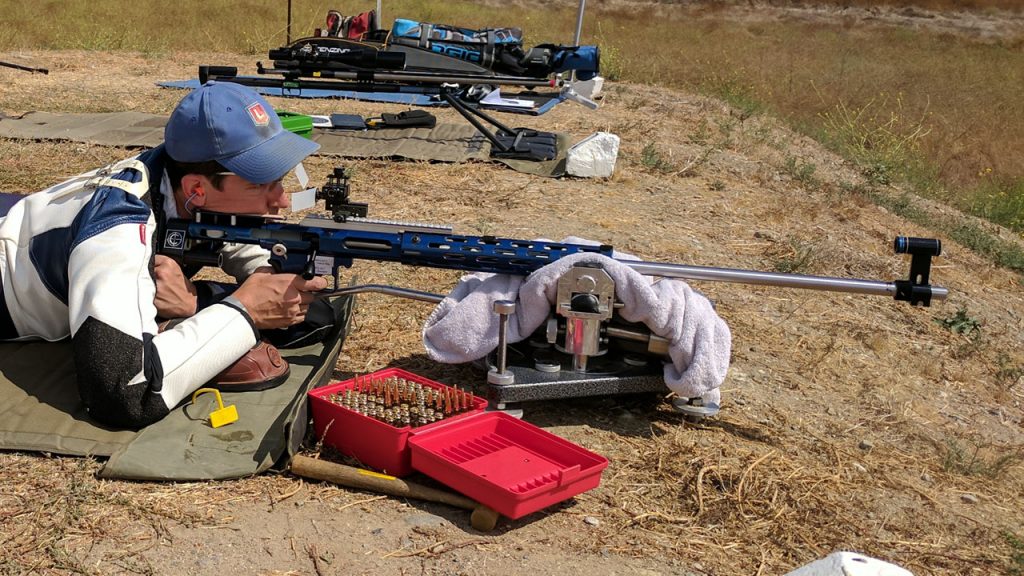 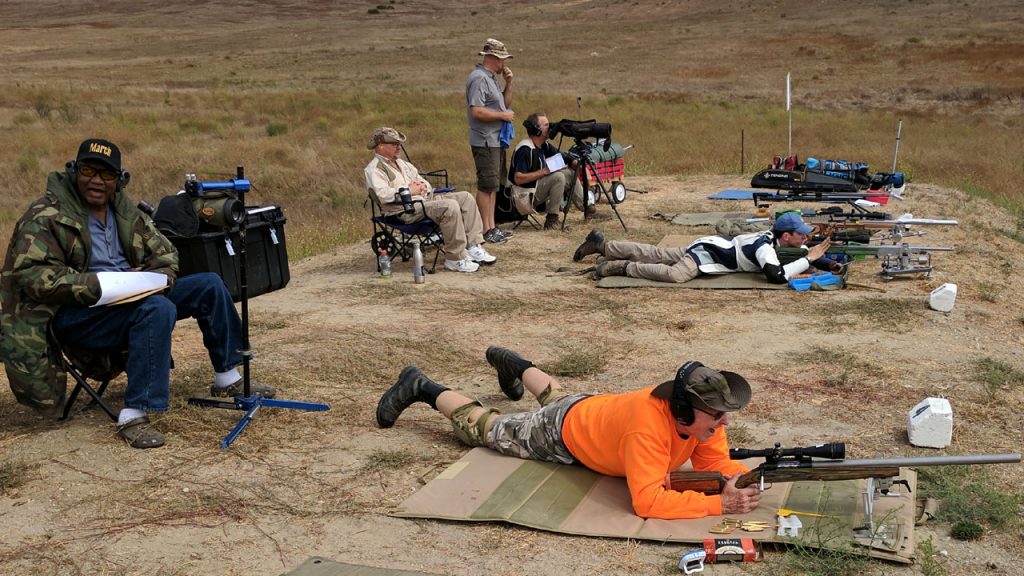 After the dust had settled and the score cards came in we had a pending national record for Service Members by the Combat Marksmanship Instructors at School of Infantry – West. Way to go guys! Again we’d like to thank those who made it possible to have such an event. Mike Jones and John Hermsen for getting us to the mound, the USMC Pit Pullers LCpl’s Enriquez, Thweatt and Moralesvilla for their prompt target service, and our medical team for the day Rich Elliott, Van Texas and Mike Nies who stood ready to help any in need. The team scores are posted below.